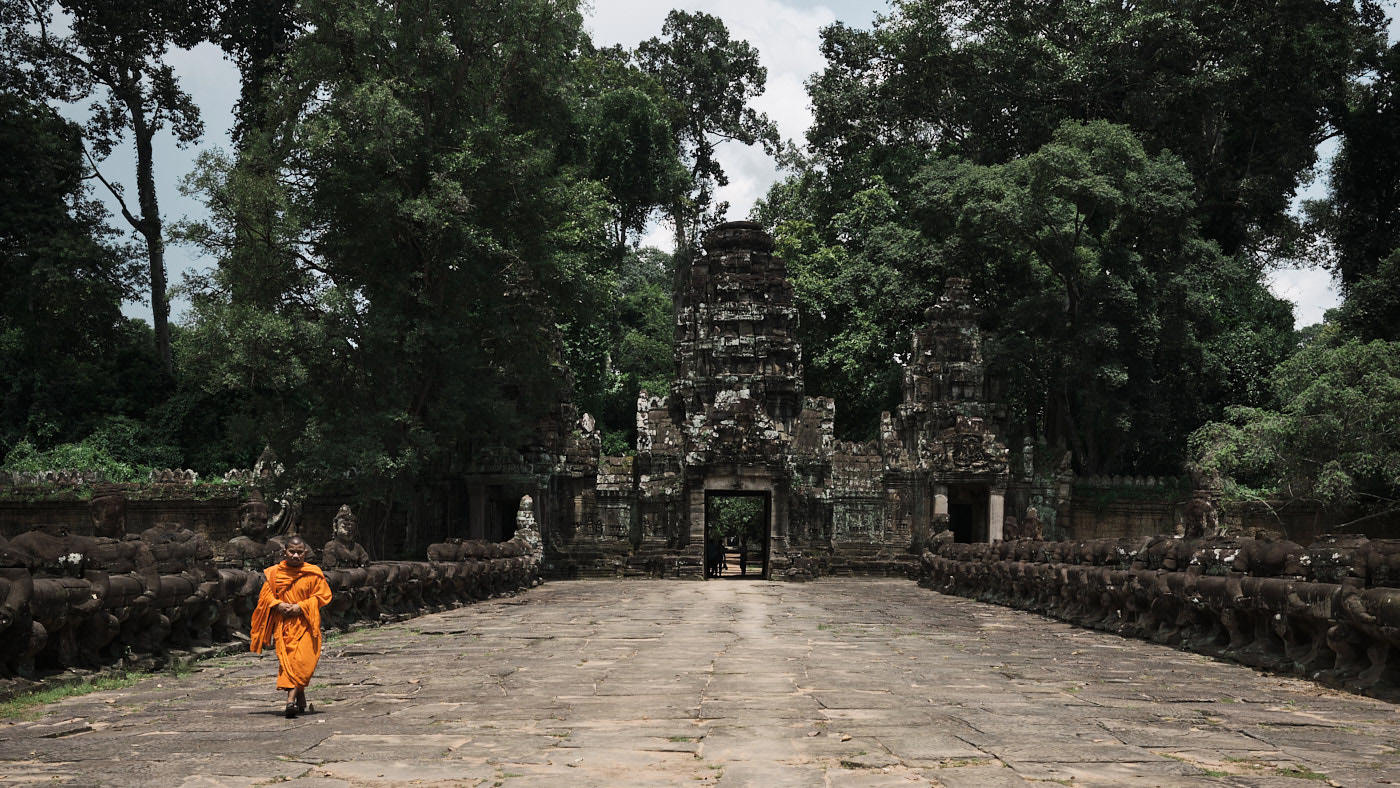 The Perfect Companion to the GFX: the X100V

In my article last month, I shared my thoughts on the GF 35-70mm lens as an all-around travel lens. It is quite a good quality lens in a small package and allowed me to bring home some wonderfully detailed images from Angkor. However, its greatest asset is also its greatest flaw, it needs to be attached to a GFX camera, which increases the size and weight of the overall package to become something that I don’t necessarily want to carry in hand unless I have a specific reason to. So, there are situations where it spends more time in the backpack than the hand. Enter its perfect companion: the X100V.

I’ve written here before about what makes the X100 series of cameras so special. They’re tiny. They’re light. They’re capable. They’re quirky. But, they’re always there. They have a loyal following of those who love them and an equally vocal base of those who do not.

The place for the GFX

My GFX100S is a joy to use and produces gorgeous images (as I imagine many of the other GFX100Ss in the world do). Combined with one of the exceptional GF lenses like my GF80mmF1.7, the results are second to none. However, the larger sensor necessitates larger and heavier lenses and quite a bit more care to ensure the best can be obtained from the situation at hand. When the highest quality is the goal, the GFX100S is the tool I reach for.

This can be somewhat cumbersome and actually counter-productive in a couple of ways when travelling for the purpose of travel itself rather than photography. Firstly, it can hinder the creative process when you begin to question if the scene at hand is actually worth a hundred megapixels and everything that comes with that. It also begins to get heavy after a couple of hours and that can sap the joy out of the day, to be sure. 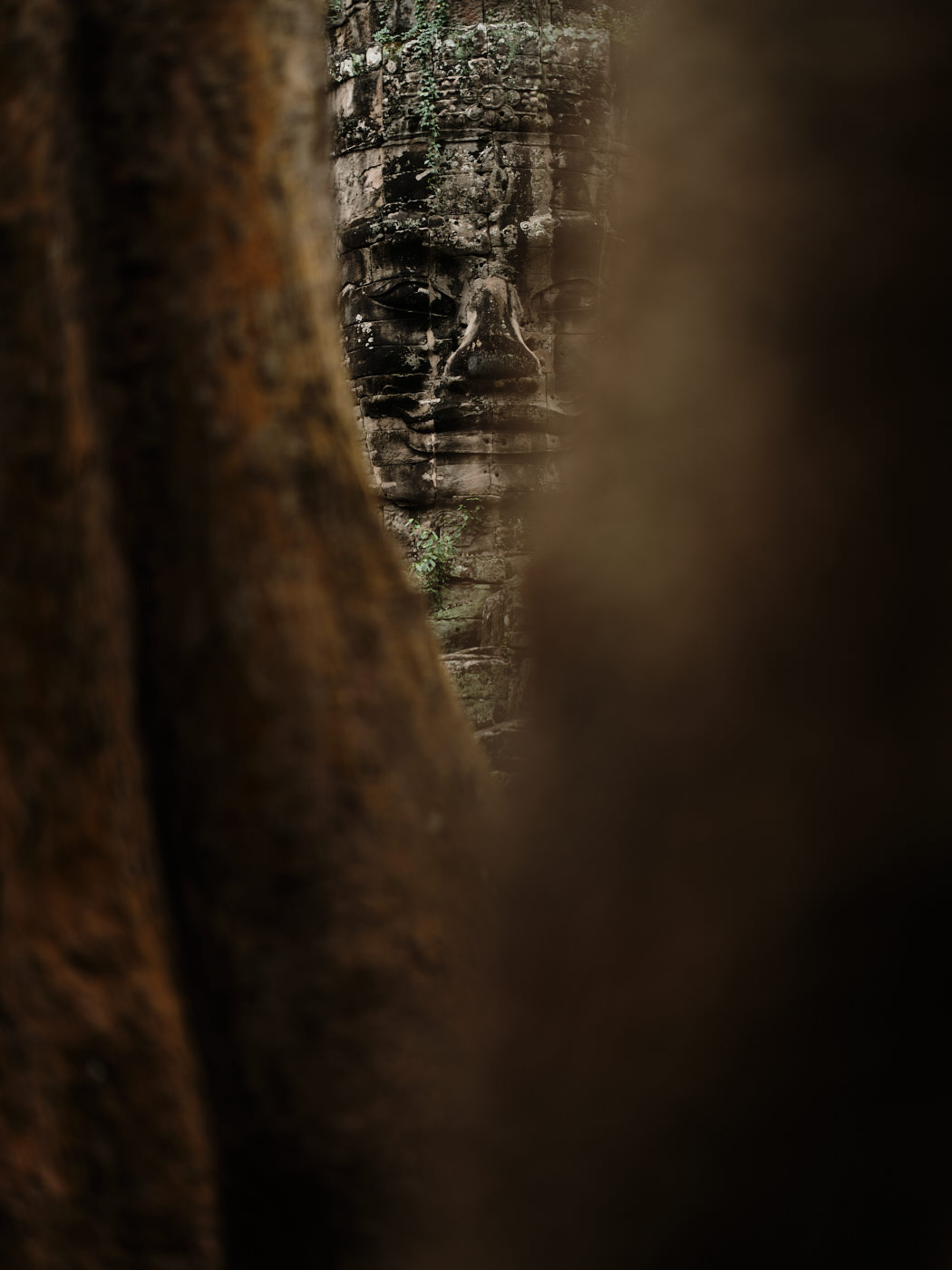 On the other hand, the X100V is a camera that doesn’t demand you respect it and beg you to make every image count. It asks you to enjoy the process of photography anywhere and everywhere. The files are small enough so as to not be a concern and the lower resolution means that you can be a little freer with what you photograph and how often you press the shutter. It is precisely this dichotomy that makes these two cameras the perfect partners for me.

The freedom to photograph anything and not have “Is this really worth 100 MP? Am I doing this camera justice?” in the back of my head is one of the foremost reasons my X100V is always with me. It might seem silly since all we’re really doing is saving pixels to a memory card that we can delete later, anyway. However, I find that I’m a lot more open to experimentation and simply photographing the world to see what might come of it when I’m using the X100V.

Here, I had the X100V on my wrist when I spotted this sliver of light illuminating the feet of one of the Apsara reliefs in Angkor Wat. I liked the light and wanted to see how it might render with my go-to film simulation for most situations, Classic Chrome. The deeper shadows and subtle transition from light to shadow worked really well for this scene, in my opinion. I may not have even made this image if I’d needed to take my GFX out of my backpack and spend time on it. I may have just moved on to spend time with my family and never given it a second thought. However, so many of the details in this evoke what it is like to walk around the temple complex in the early morning for me. 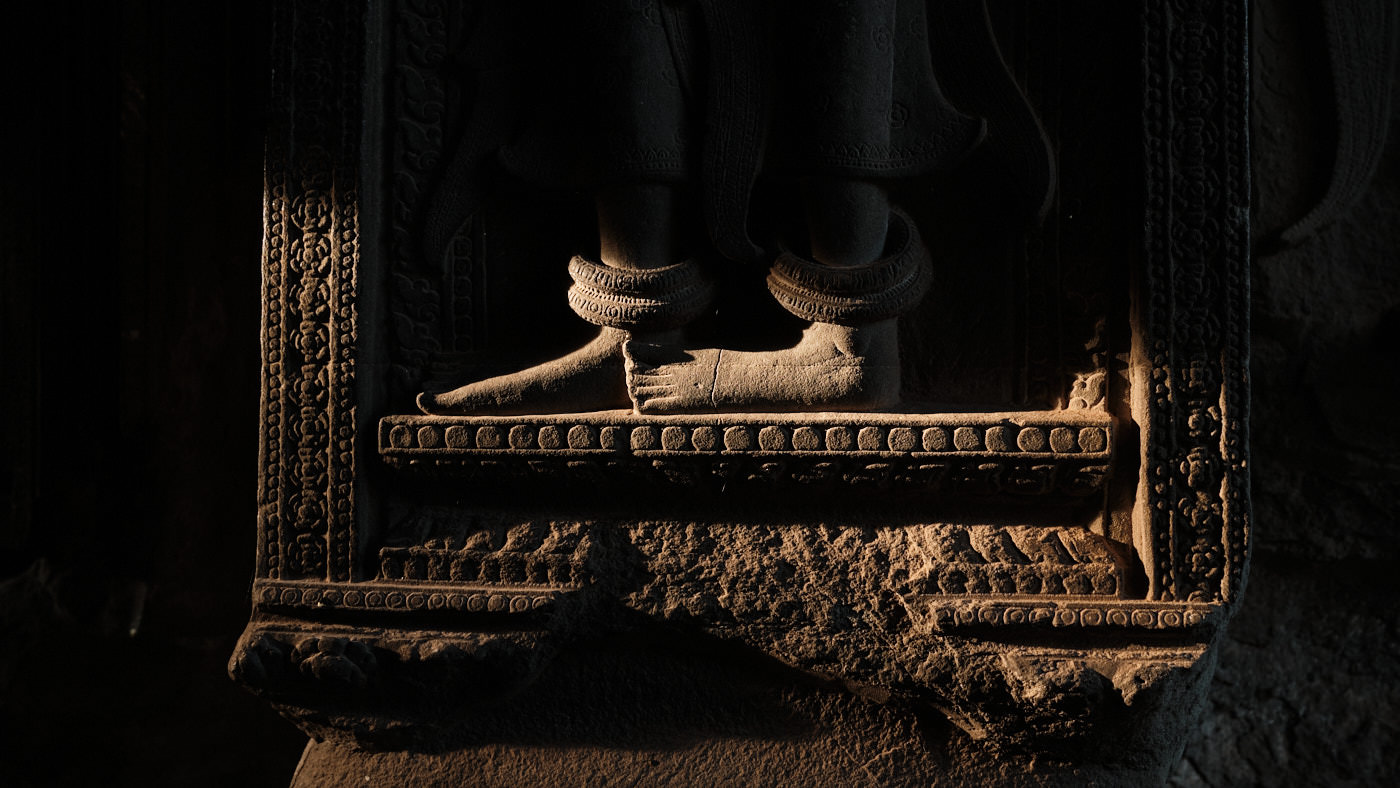 Since the X100V is on my wrist all the time and is so small and light, I barely notice it, I’m certainly inclined to make more images than I would if I needed to take a camera out of my bag. More than that, however, I can photograph things at a moment’s notice. I always try to have the camera ready to photograph a scene that might unfold in front of my eyes. Whether this means having the camera in aperture priority mode so I don’t have to worry about the exposure or having the settings in the ballpark for the light I’m working in, I always try to make sure I’m ready with this camera and treat photography as just another part of walking through a place.

An example of that would be crossing back to pick up my bike at the end of a long day when three locals cycled past me. I had my exposure already set for the light at that time and autofocus enabled to make things quick and easy. It was a simple case of raising the camera to my eye and pressing the shutter a few times (again, something I don’t often do with the GFX) in order to get an image that I wouldn’t have if I hadn’t dialled in my settings and had the camera on my wrist. Here, I didn’t really care what those settings were as long as I had a well-exposed image of the scene. I actually started with the camera at 1/500 and f/4 from shooting under a tree just moments before, but quickly stopped the aperture down (quicker than changing the shutter speed in this case) to expose nicely for the brighter parts of the scene. 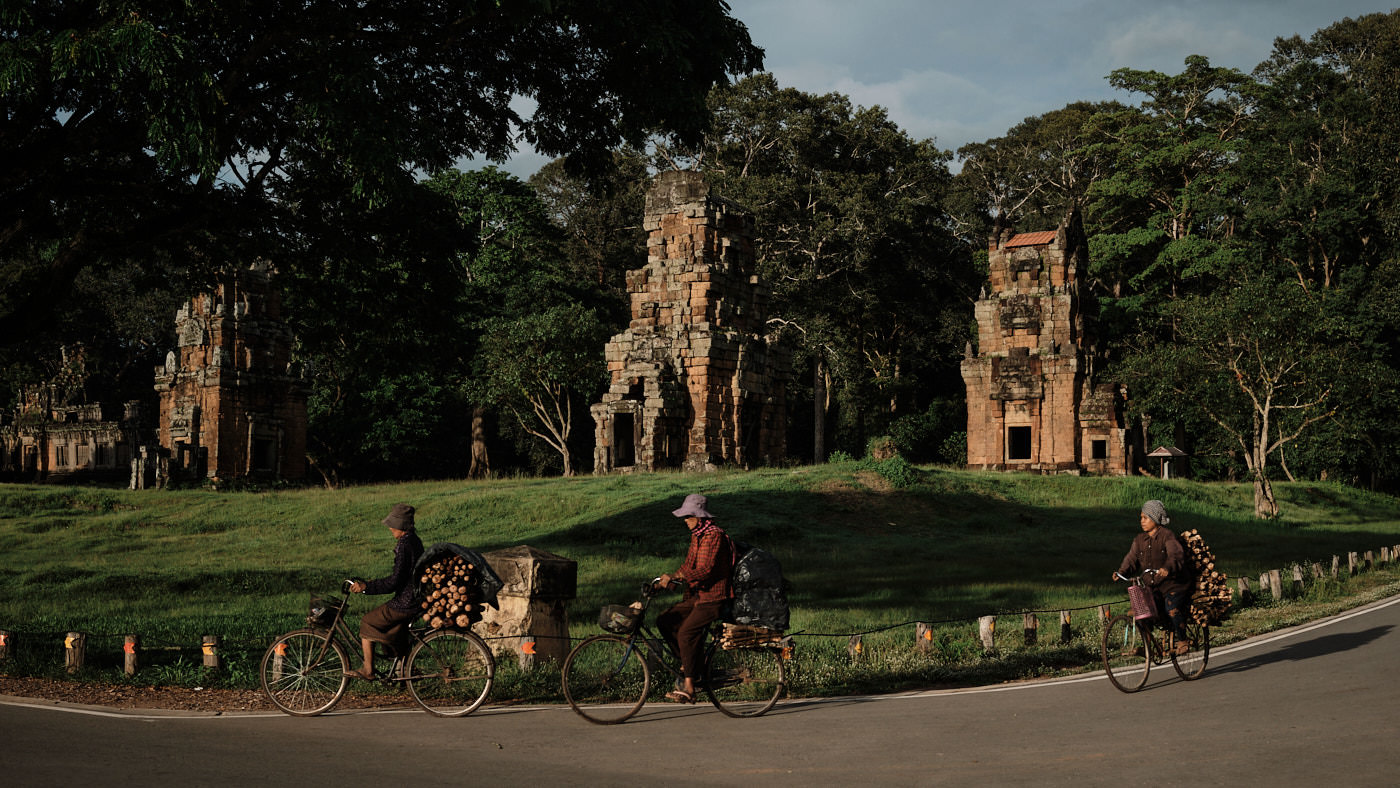 The other part of the mindset that the X100V brings for me is a desire to document things that happen to myself and my companions. The camera is so simple to use and produces such great quality that I find myself snapping away to take home images of my family or the stray cats we befriend along the way. There are a couple of great things about this, aside from the excellent image quality.

The first is that I don’t find myself digging through my phone later to find an image of family that doesn’t match up with the rest of the trip photos. Although the GFX does produce a lot more detail and far better dynamic range than the X100V, the overall feel of the images is remarkably similar. So, a picture of the temples shot on the GFX is right at home next to an image of my mother or the lunch that we ate. A picture from my Galaxy S21, however, needs quite a bit of editing to get it close to either of those.

The second is the ability to link my X100V directly to my Instax printer and create a set of physical takeaways from the day’s journey to share with my companions. This is one of my favourite things about having this camera with me on any journey. If you don’t own an Instax printer, I highly recommend getting yourself one! 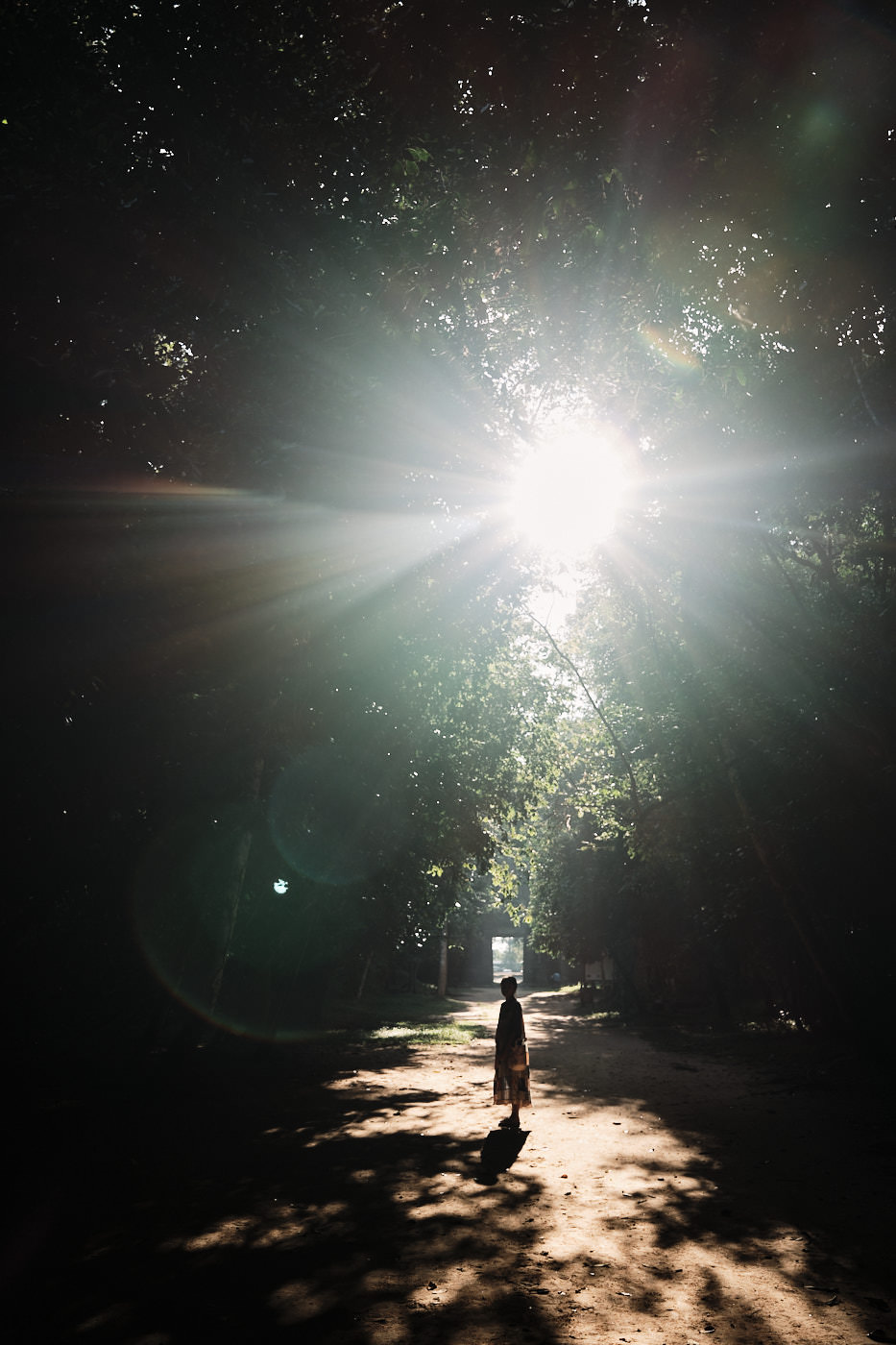 I’m aware that being able to choose between the X100V, the X-T4 and the GFX 100S is a ridiculously privileged position to be in, especially when travelling. But I do hope that this article has given you an idea of how I think about moving between the systems and which one might fit the way you like to make photographs. In the end, I’m very happy to have had access to the unpretentious nature of the X100V while also being able to work with the perfection that is the GFX 100S when I wanted to. Both of these tools meant that I could come back with images that I was happy with and that will serve as memories in times to come.

Which Fujifilm systems do you own? What made you choose them to be your tools? 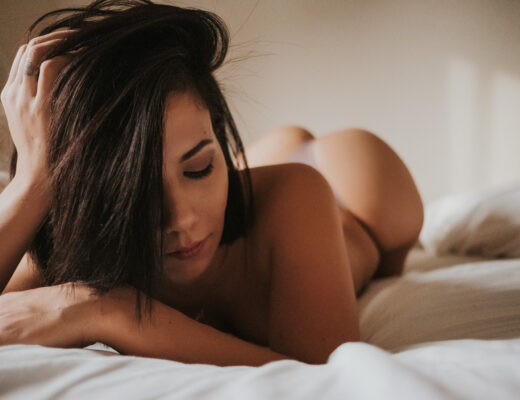 Simple and Sweet: My Kit Loadout for In-Home Boudoir Sessions 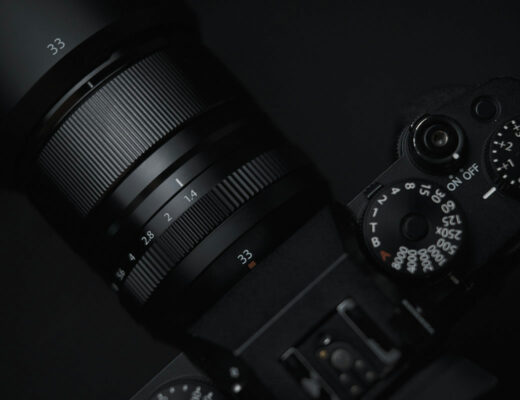 Fujifilm XF33mmF1.4: One Month and Counting 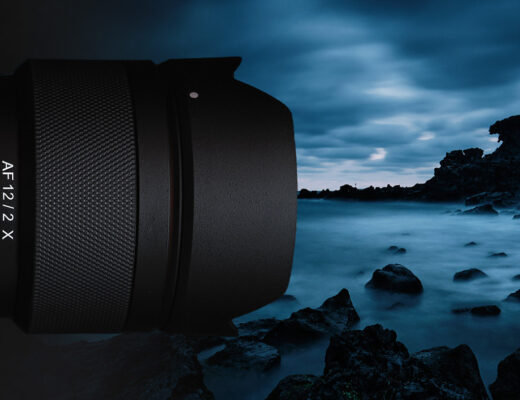 5 Days on Jeju Island With the Samyang 12mmF2 AF