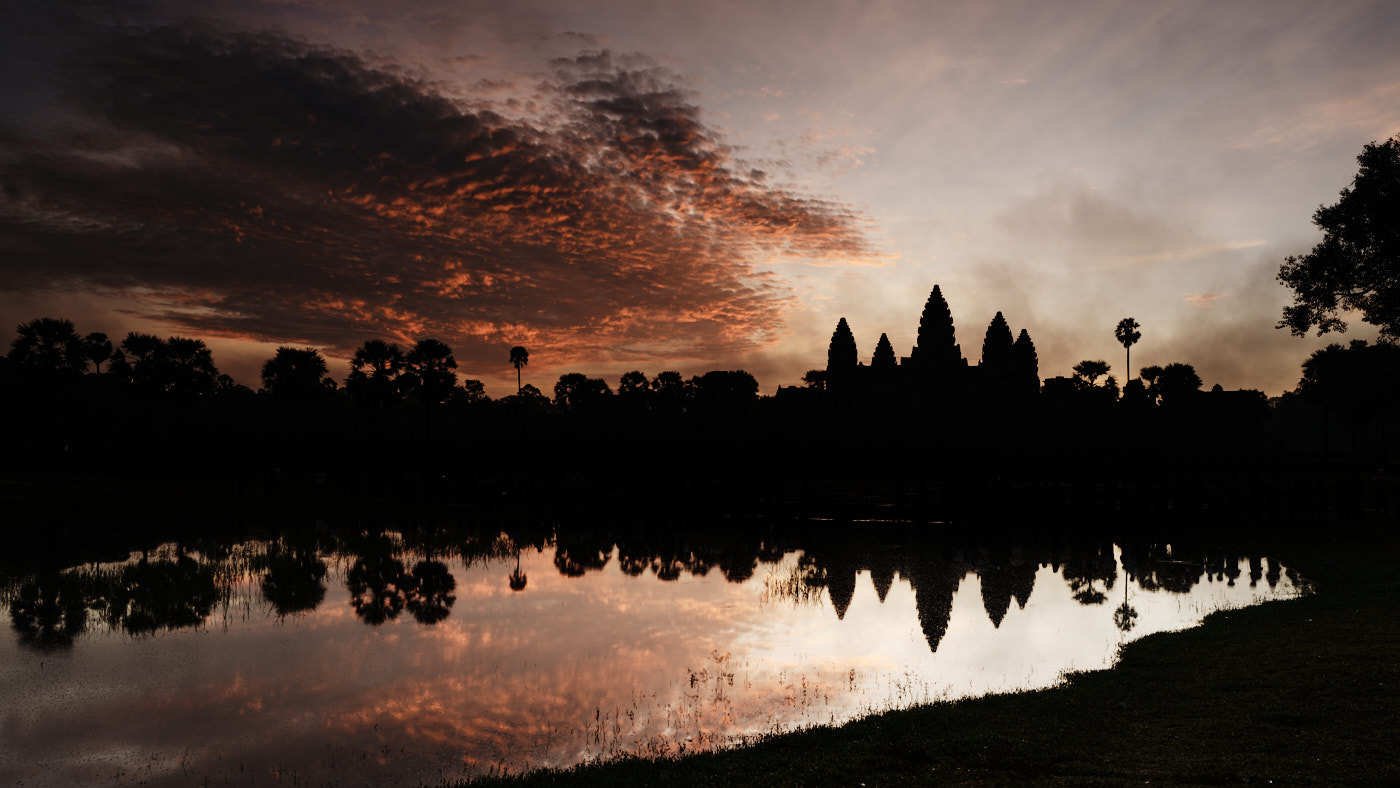 Two weeks ago, it happened for the first time in over two years. I stepped onto an aeroplane bound for a foreign land. While this was not a photography-focused trip, I still had a small backpack filled with a few Fujifilm toys to record the journey.

I wanted to keep my kit small and simple so as to focus my energy on the people I would be travelling with: my wife and my mother (who I hadn’t seen for almost four years). I have a video in the works right now about achieving small photographic goals while travelling with family, so do check that out in a couple of weeks. In this blog, though, I want to talk about the experience of working with one of the tools I decided to take with me: the GFX100S with the ‘kit’ GF35-70mmF3.5-5.6 lens.

I chose to make this part of my kit because I wanted the excellent quality that the GFX has to offer without the bulk of the higher-end lenses. Everything I had for this journey needed to fit into my Tenba Solstice 12L backpack, so there was no room for the GF45-100mmF4 and a big set of filters. Keeping myself mobile was the goal. At the urging of a good friend of mine, I decided to pick up a used copy of the 35-70mm lens and not look back.

On my first morning out, my mother and I stopped by Angkor Wat for the obligatory sunrise view. While it wasn’t my first time in the area, it was hers and it’s somewhat of a right of passage. After exploring the temple for a couple of hours, we stopped in the shade of the libraries to enjoy some respite from the heat of the late morning sun. This small backpack with the GFX100S, GF35-70mm, GF80mm, X100V, two conversion lenses and my Haida M7 kit was barely even noticeable at this stage, which is exactly how I wanted this kit to be! 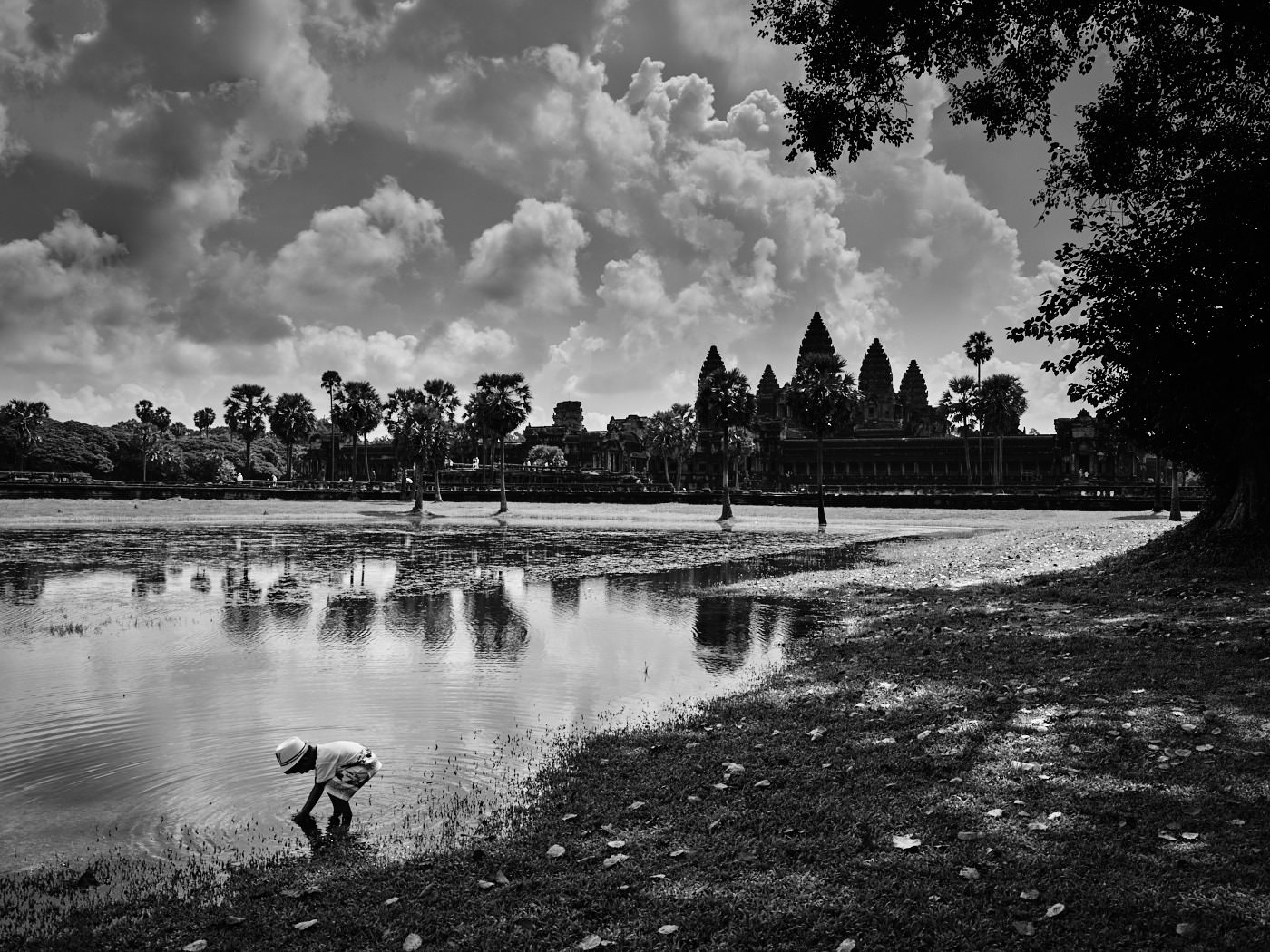 Monsoon clouds had filled the sky by this time and I noticed a crowd of people milling about nearby the reflecting pond that sees scores of tourists every morning. I knew there must be a frame there somewhere, so I attached the Haida M7 with a 3-stop graduated filter (for the sky) and headed over to the water’s edge. It wasn’t long before the scene unfolded in front of me and I was able to capture this frame. I quickly focused and refocused on the young boy as he began to play in the water and grabbed several different frames. The rapid autofocus of the GF35-70mm and the shot-to-shot speed of the GFX100S in this instance made it feel like I was using my X-T4. It’s a great combo in that regard and allowed me to focus on doing the composition dance rather than waiting for the camera to keep up with me.

While the lens doesn’t have an aperture as fast as the GF45-100mm or the GF primes, I did really enjoy having the wider focal length that it offered. 35mm on the GFX is roughly equivalent to a 28mm on a full-frame system or an 18mm on Fujifilm X. However, with the GFX’s ‘taller’ sensor, the field-of-view feels a lot wider. I found myself making use of that extra compositional real estate quite often, even though I  had the WCL for my X100V with me as well.

That extra width allowed me to place the roots of one of the giant trees at Ta Nei just where I wanted them. The afternoon sun was filtering through the trees and striking this trunk just right as we headed back to pick up our bikes. So, I stopped (once again leaving myself at the mercy of the red ants) to make an image. I couldn’t get it to work quite as well with the 3:2 ratio of the X100V but the GFX frame felt just right. 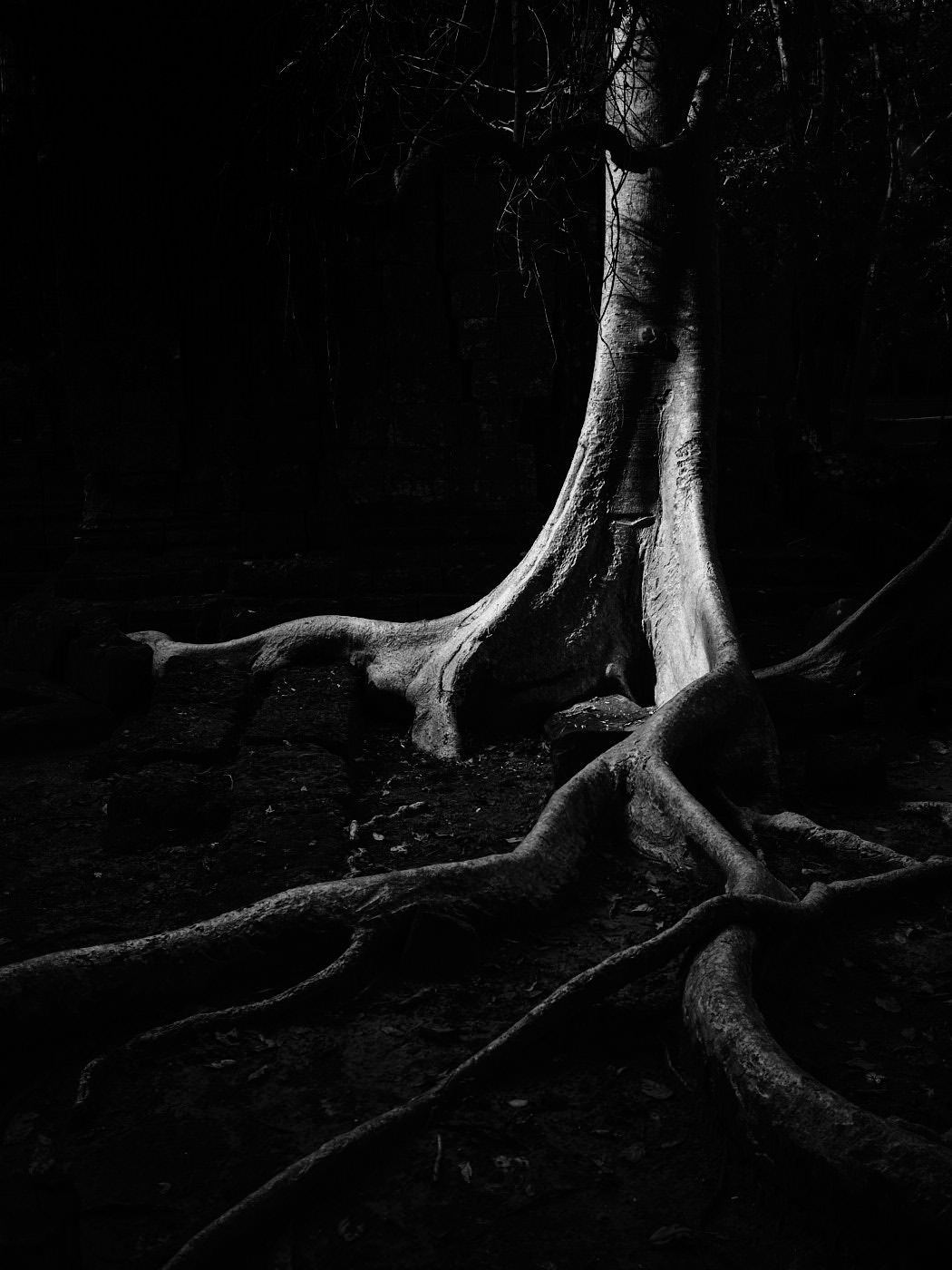 This lens does not have OIS, which could make it somewhat limiting if your chosen GFX body doesn’t have IBIS. The slower aperture necessitates quite a bit of light in order to make images. Coupled with the GFX50S II or one of the GFX100 cameras, though, this is a moot point. Even in the most precarious of perches, I was able to get sharp images at well below what I would normally consider hand-holding with a GFX.

In order to get this image of the carved columns at Ta Prohm, I needed to have one foot on each side of a large stone that had fallen from the temple. By being anywhere else, including stepping back and zooming in, I couldn’t quite get the feeling I wanted from the composition, so I found myself perched uncomfortably on either side of a stone block with shaky hands from the position I was in and, yet, still able to come home with a sharp image of the carvings. 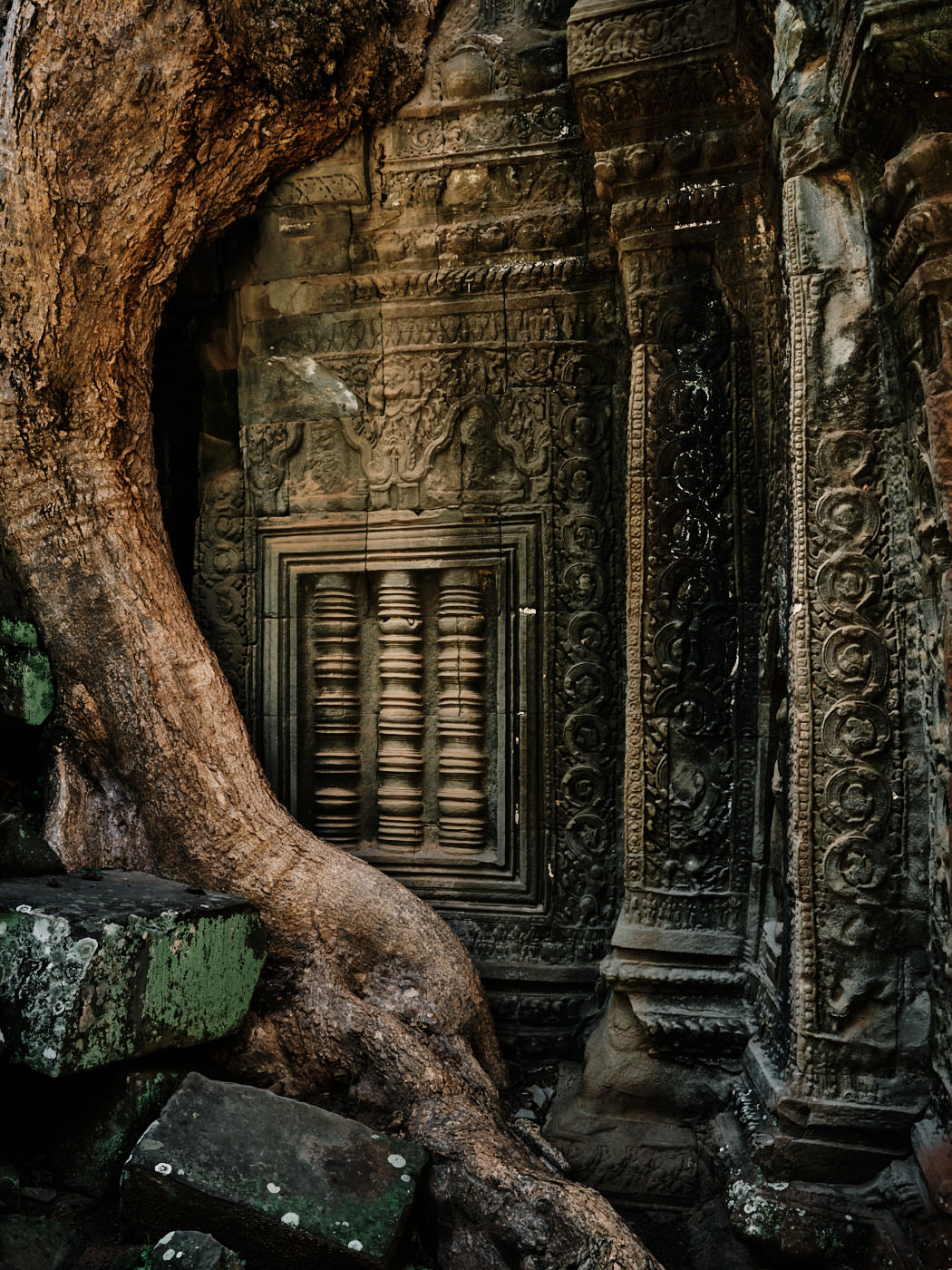 My primary goal with this trip was to enjoy first and photograph second, so my equipment needed to be able to hold up to anything I could throw at it. Angkor could be dusty one moment and pouring rain the next. Despite its telescoping barrel, the lens is weather-sealed like other GF lenses, which gave some extra peace of mind. It meant that wouldn’t have to worry about shooting in light rain during the trip or be tucking it away every moment for fear of dust getting inside.

The combination of that confidence and the zoom range of this lens gave me the ability to shoot a lot of different frames of this scene very quickly. Being that most visitors to the complex had opted to stay home on this rainy day, I asked my ever-supportive wife to walk back and forth a couple of times so I could get a range of images to show the scale of Prasat Bakong.

While the image quality is good, the autofocus swift, and the focal range useful, possibly the best thing about this lens for this trip was how small and light the overall package was. Being almost the same size and weight as a full-frame camera with a basic kit lens, it not only fit snuggly in my bag without causing any pain over long days out in the temple complex but also didn’t draw any attention to itself. When travelling for the sake of travel and the people you’re with, this is paramount and the lens did not disappoint.

If I were traveling specifically for photography, I would likely have taken the 45-100mm and the 110mm lenses, perhaps with the 23mmF4 if I could get my hands on one. However, as a walk-around lens that produces good quality images and doesn’t get in the way, the GF35-70mmF3.5-5.6 was hard to beat for this trip. 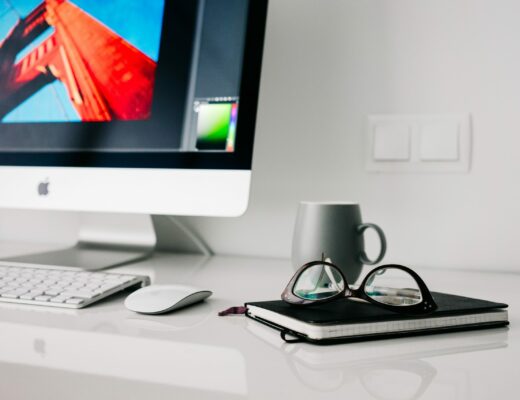 Get Your Colors Right – Color Spaces and Display Calibration 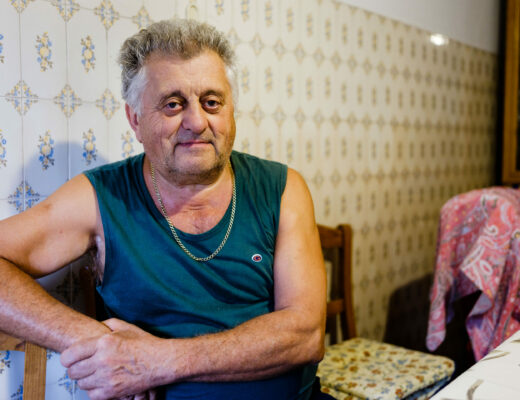