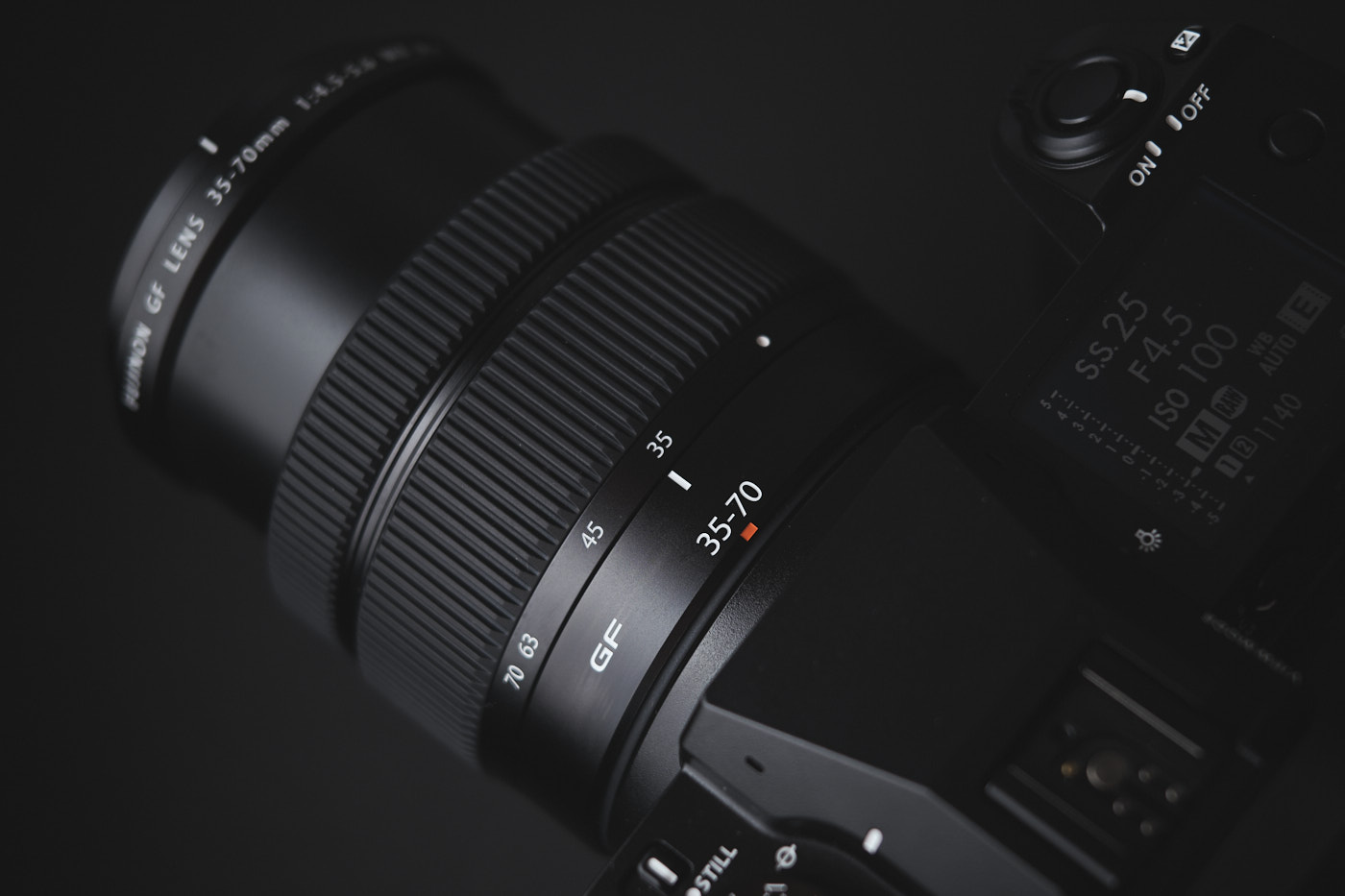 A few months back, I wrote a full post gushing praise on the GFX100S here and mentioned that from the samples I’d seen (see the full resolution images at the bottom of the page), the newly announced GF35-70mmF4.5-5.6 didn’t look like it was up to the task when compared to other GF lenses. I’ve since had the opportunity to work with the lens myself and I stand corrected. I am impressed with what Fujifilm has done, especially considering the price point.

This lens is essentially a medium-format kit lens. With its useful, if rather short, focal range of 35-70mm (~28-55mm in full-frame terms, ~19-36mm in Fujifilm X), this lens feels like it’s aimed towards newcomers to the GFX system who might want a lens for general applications. I decided that rather than test it rigorously and come back with a collection of dull samples, I’d take it out for a day on the GFX50S II and photograph Seoul the way a tourist might.

Unfortunately for me, the short two days I had this lens were some of the most polluted days we’ve had in a while here in Seoul, so I was lacking any great light, but I still managed to explore the city for one of those days and get a collection of samples to show off what the lens is capable of.

To get the day started I caught a bus downtown for a cup of coffee. In this world of social media, we can’t eat or drink before taking a photograph, so I decided to make a 50-megapixel image of the order. Happy with the amount of fine detail in the woodgrain and parchment, I downed my breakfast and headed out into the streets. 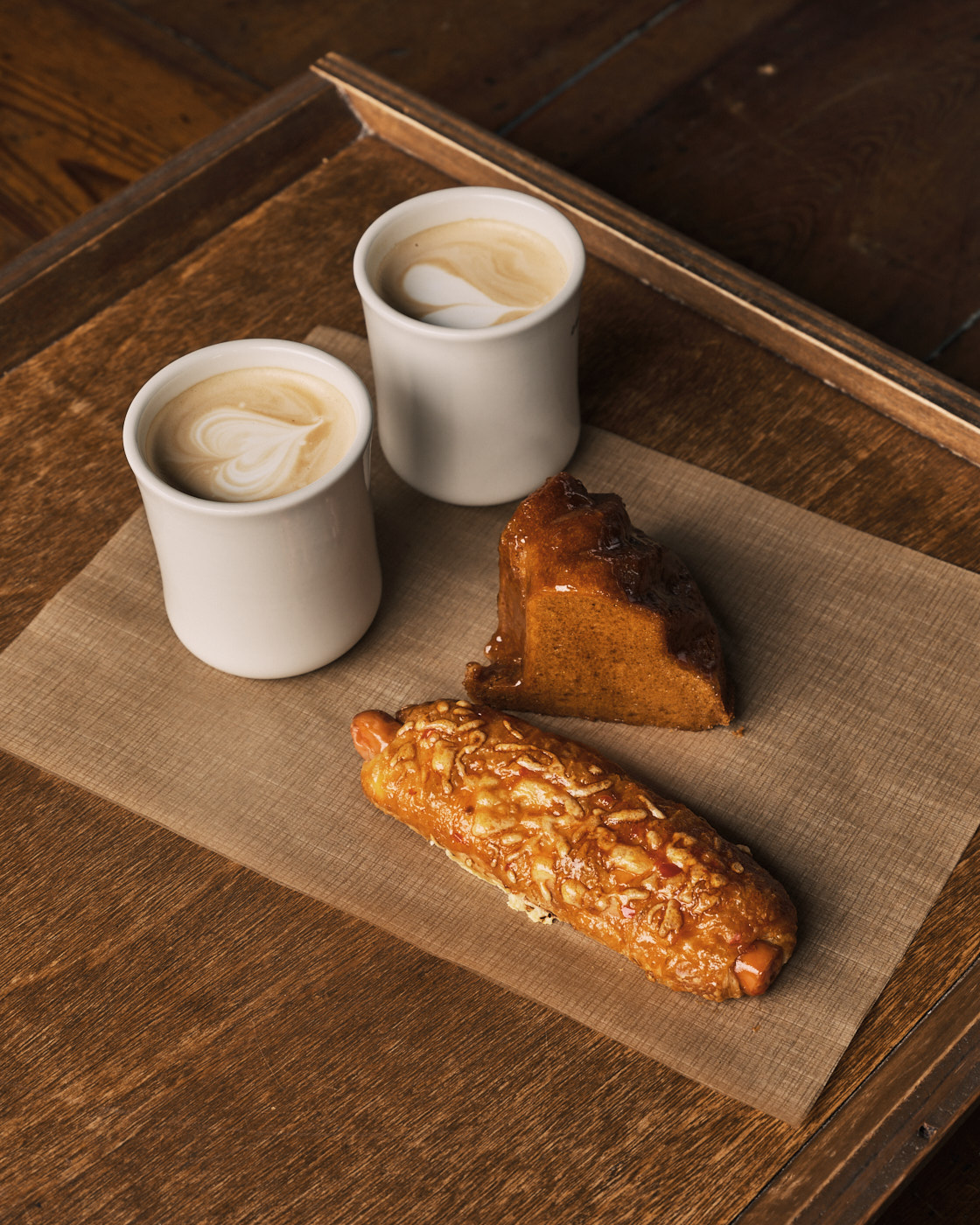 I began this walk down one of our popular tourist alleys and picked out a few storefronts to capture along the way. What I noticed here was that, when coupled with the IBIS in the GFX50S II, this lens can be used at very slow shutter speeds and still render plenty of detail. Not only that, but the autofocus is on par with the other linear-motor lenses in the GF lineup, so it was easy to quickly acquire focus and snap away in the street. This made it a fun experience almost akin to working with the X-H1. 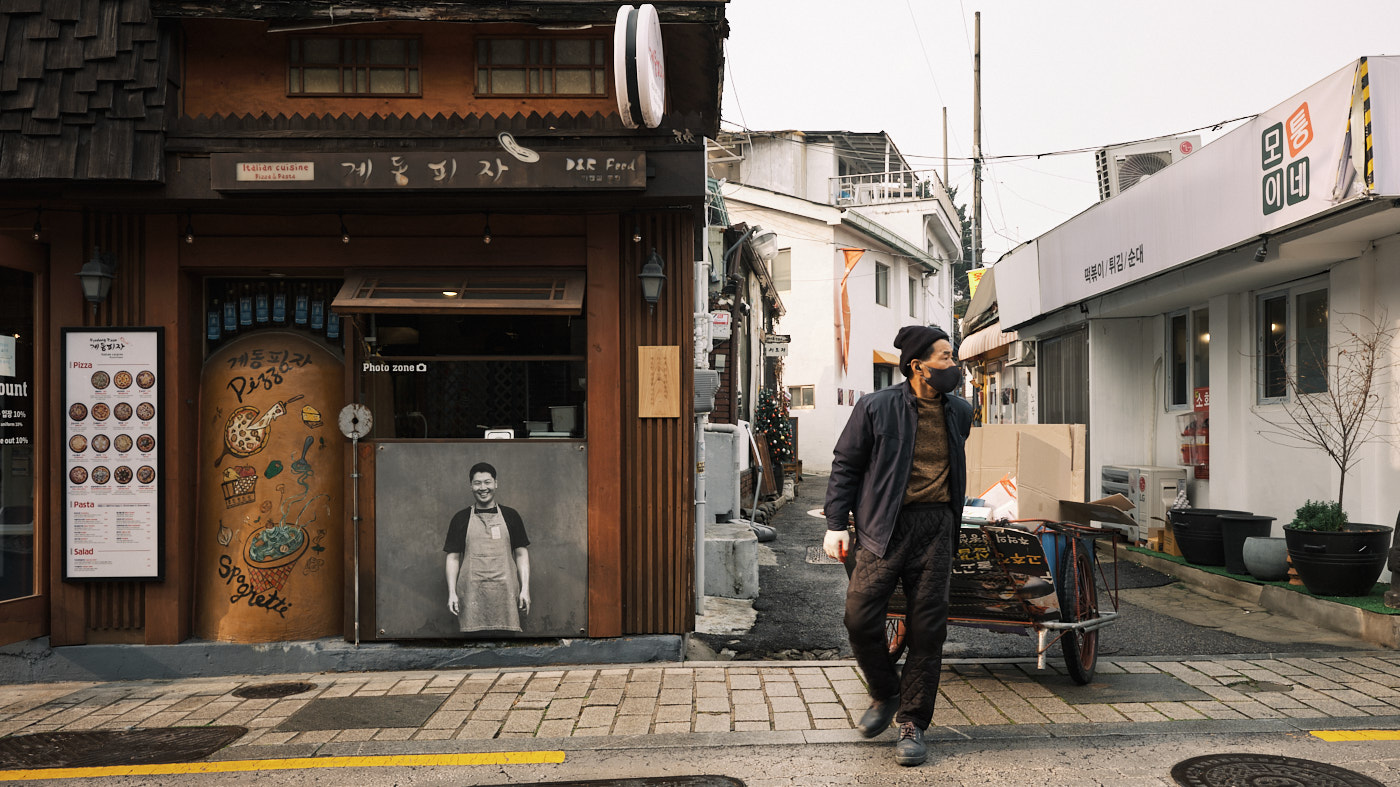 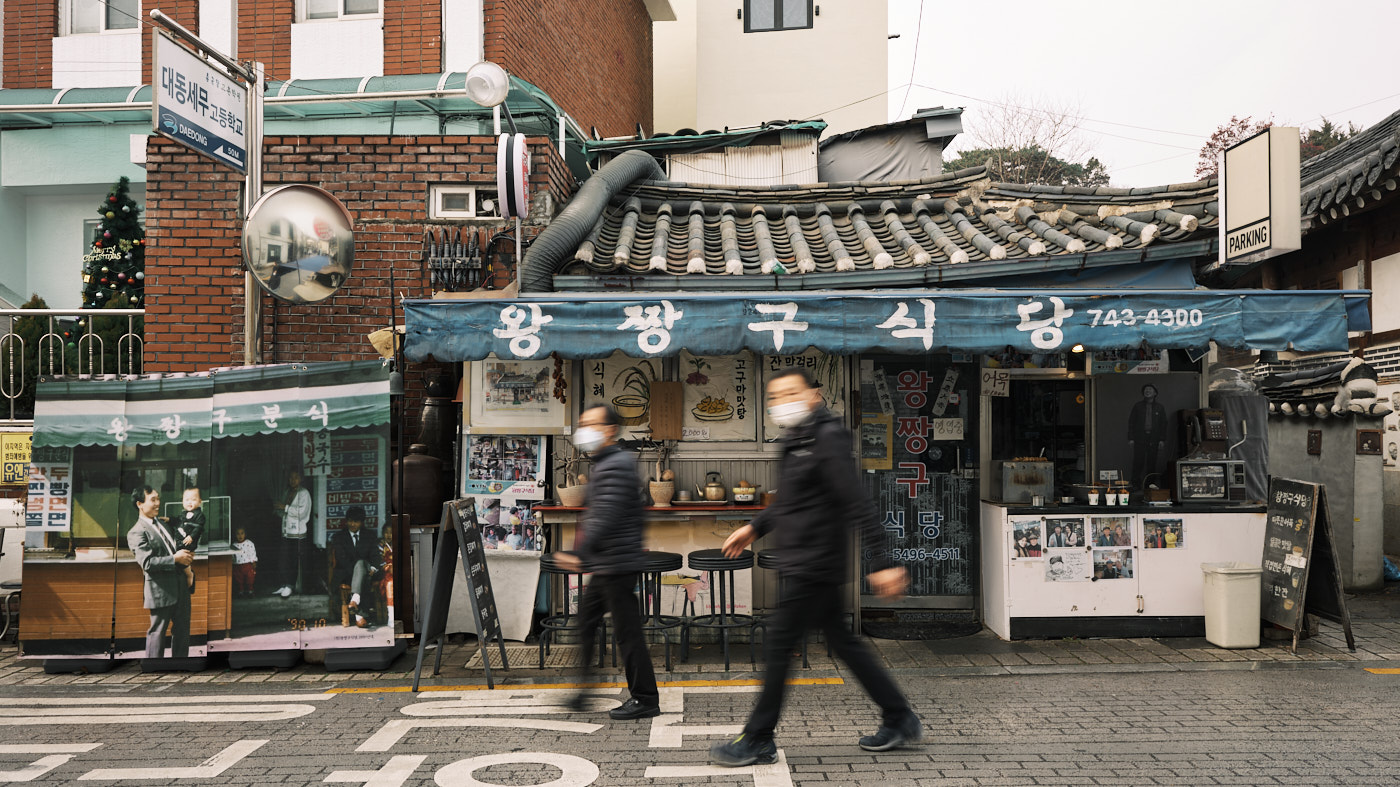 Sharpness and depth of field

At this point in my walk, my wife was still braving the pollution with me, so I took the opportunity to make a quick portrait at 70mm to see not only how well it would render detail, but how much shallow depth of field would be possible. A maximum aperture of f/5.6 on the GFX system renders a depth of field approximately equivalent to f/4.5 on full-frame or f/3.2 on Fujifilm X. This is not the shallowest depth of field, but certainly good enough. The one thing to remember here is that we still need f/5.6 worth of light gathered to create that same depth of field. 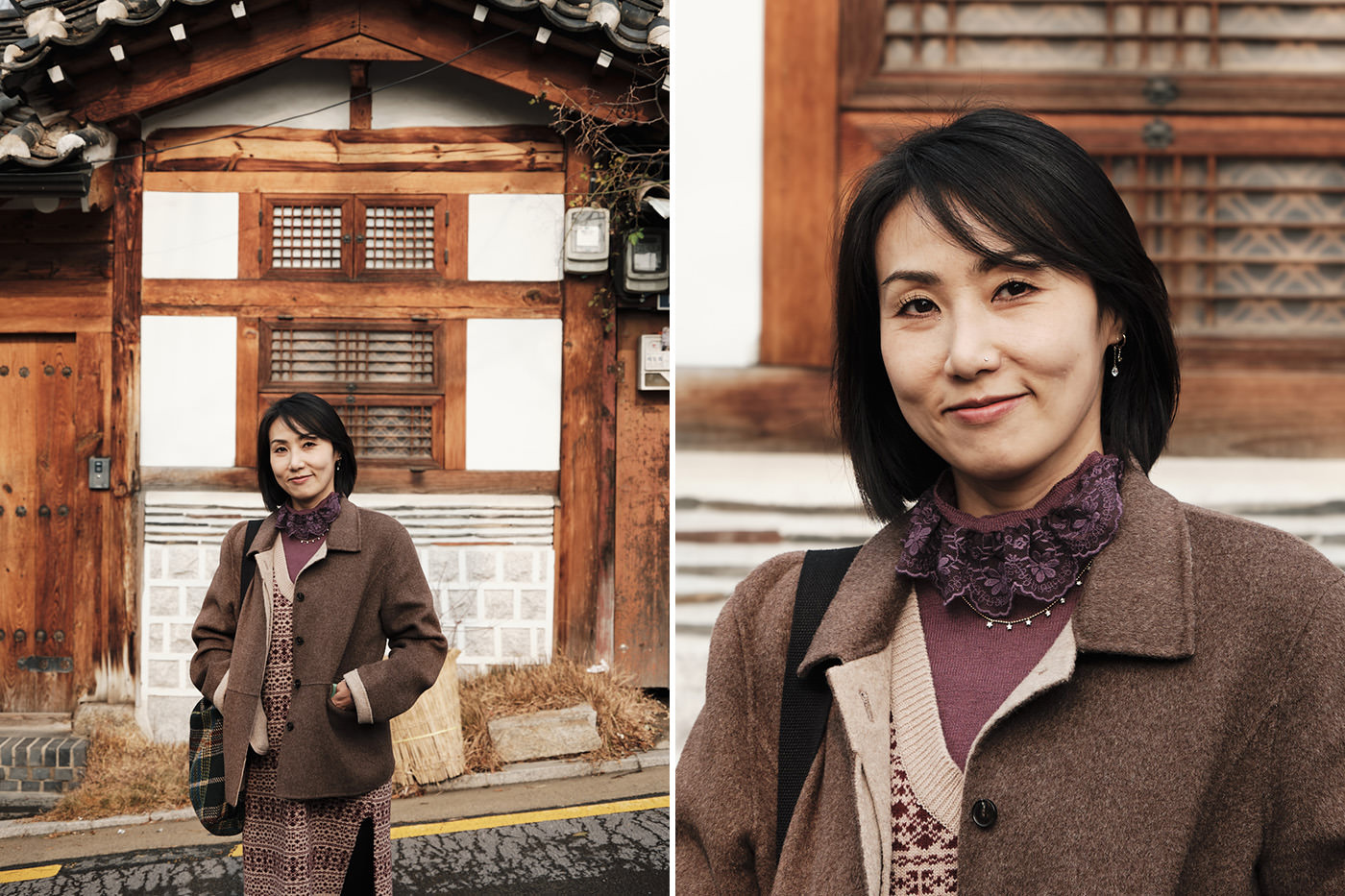 As you can see, the lens renders a lot of detail, even when used wide open. My, vastly heavier, larger, and more expensive, GF45-100mmF4 does render a little more fine detail, especially in the corners, but that is to be expected. There is one small caveat to the sharpness that I discovered, which is when working at the lens’ minimum focus distance wide open at 70mm. At this point we do end up with a similar effect to the XF23mmF2 or the Mark I lens from the X100 series. Moving back a few centimetres or stopping down to f/8 completely negates this, however, so it’s a minor issue that is easily avoided. 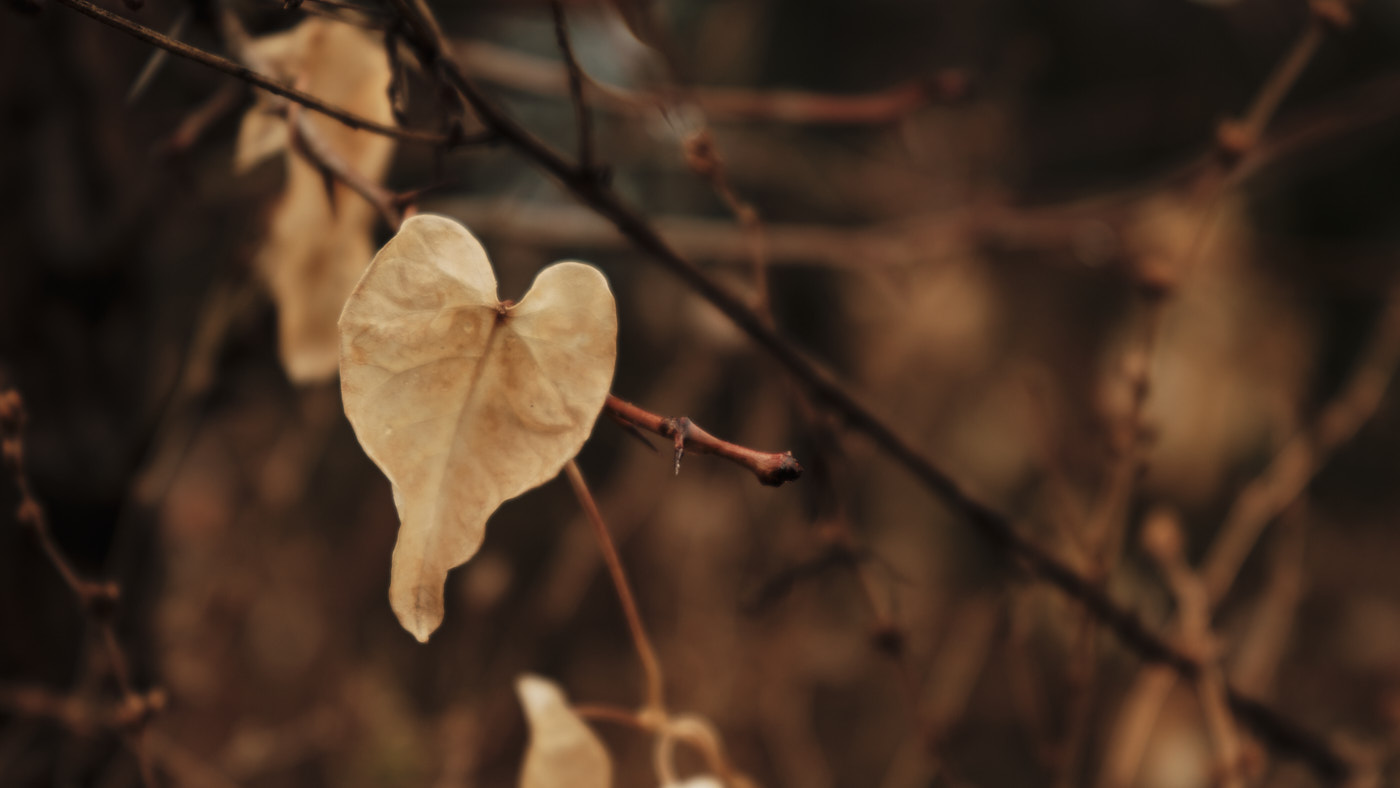 Having seen the bokeh that might come from a portrait, I wanted to see what I could achieve focusing close. Of course, I wasn’t expecting the magic of the GF110mmF2 or any of the other exotic options, but I was pleasantly surprised with my closeup of an autumn leaf. The bokeh is pleasant and, when working close, shallow depth of field is definitely possible. 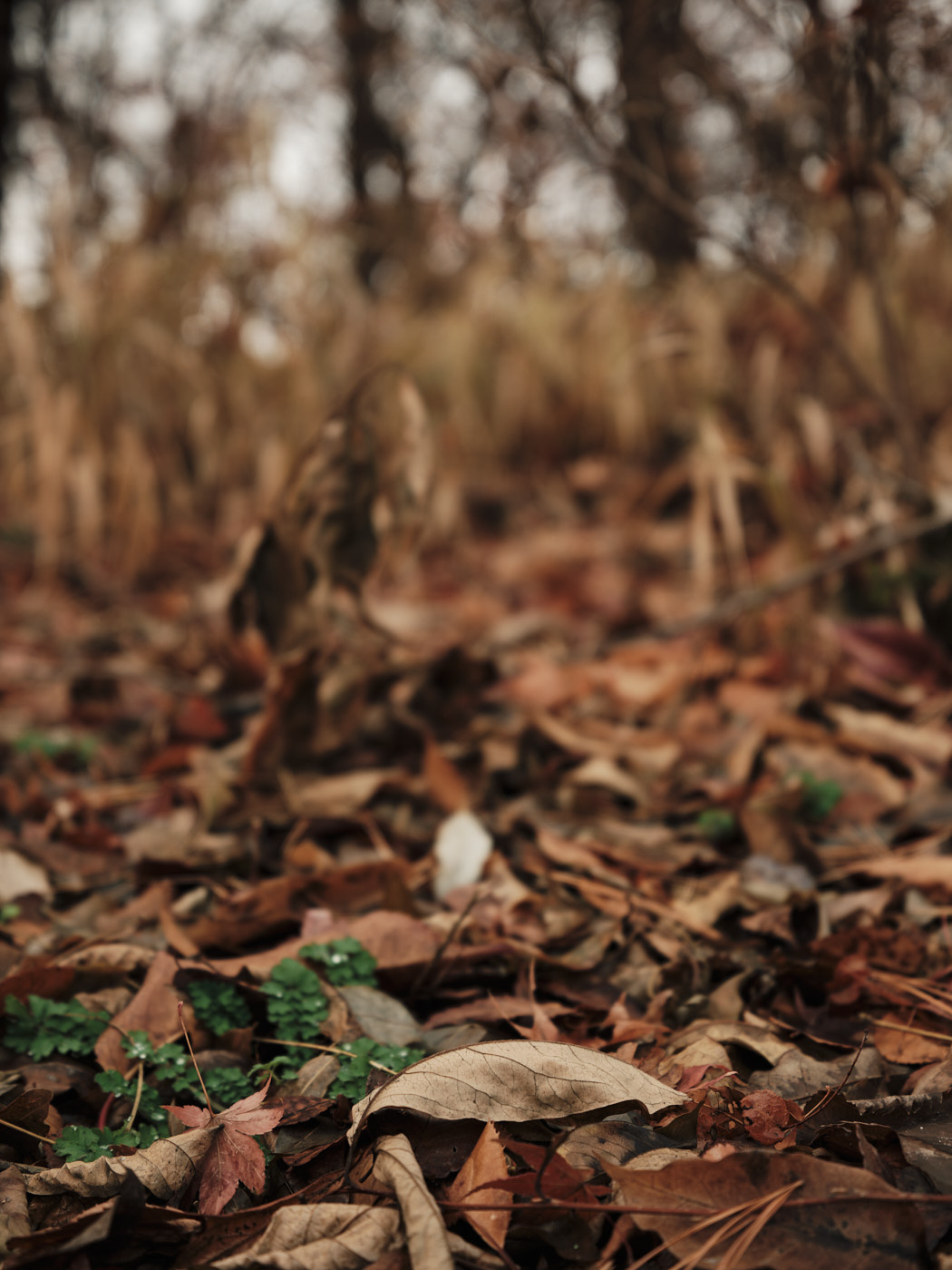 Continuing my walk, I stopped by Changdeokgung, one of Seoul’s palaces. I was almost alone in the complex as the less deadline-driven citizens were mostly hiding indoors to avoid the poor air quality. This meant that I could get some rare glimpses of the palace grounds with very few people inside. I made the most of this by photographing the uncommon calm.

It was here that the focal range of this lens really shone. For everything but the tightest close-ups that I wanted, I found a way to make the focal lengths I had with me work. I especially appreciated the 35mm focal length as someone coming from the GF45-100mm. The slightly wider field of view allowed me to take in some scenes that I wouldn’t have otherwise been able to.

Next, I headed over to the Museum of Modern and Contemporary Art, which is a couple of buildings made up of very straight lines, in the hopes of getting some light and shadow if the clouds and haze parted a little. I was rewarded with a few brief moments of soft light, but nothing like what I’d hoped for. 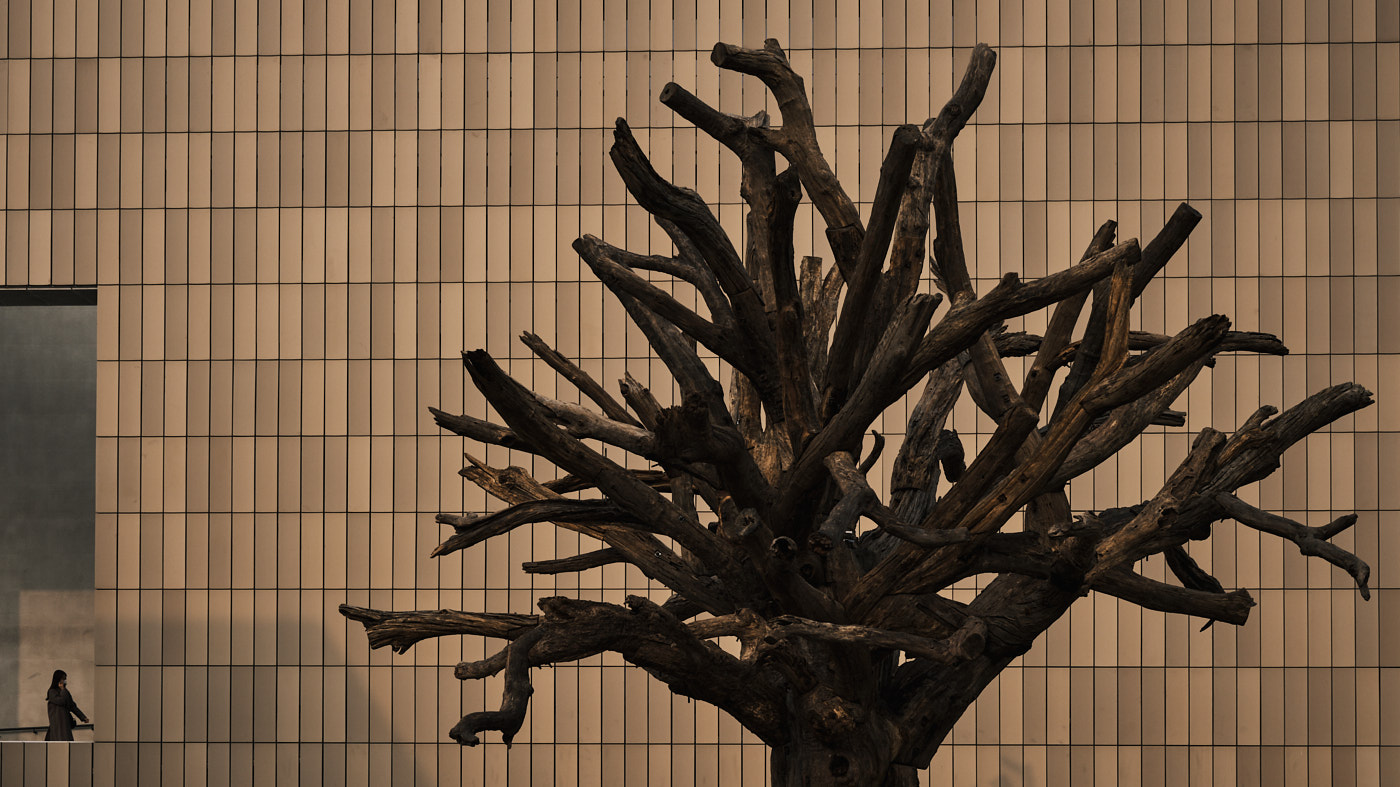 Detail on the tripod

So, I decided to head inside another of the city’s palaces, Gyeongbokgung. Here, I mounted the camera on my tripod and made some less run-and-gun compositions to see if I could eke any more detail out of the lens by having it locked down. Honestly, I couldn’t notice any difference. When used at reasonable shutter speeds, it seems like the IBIS from the GFX50S II does an excellent job when paired with this lens. 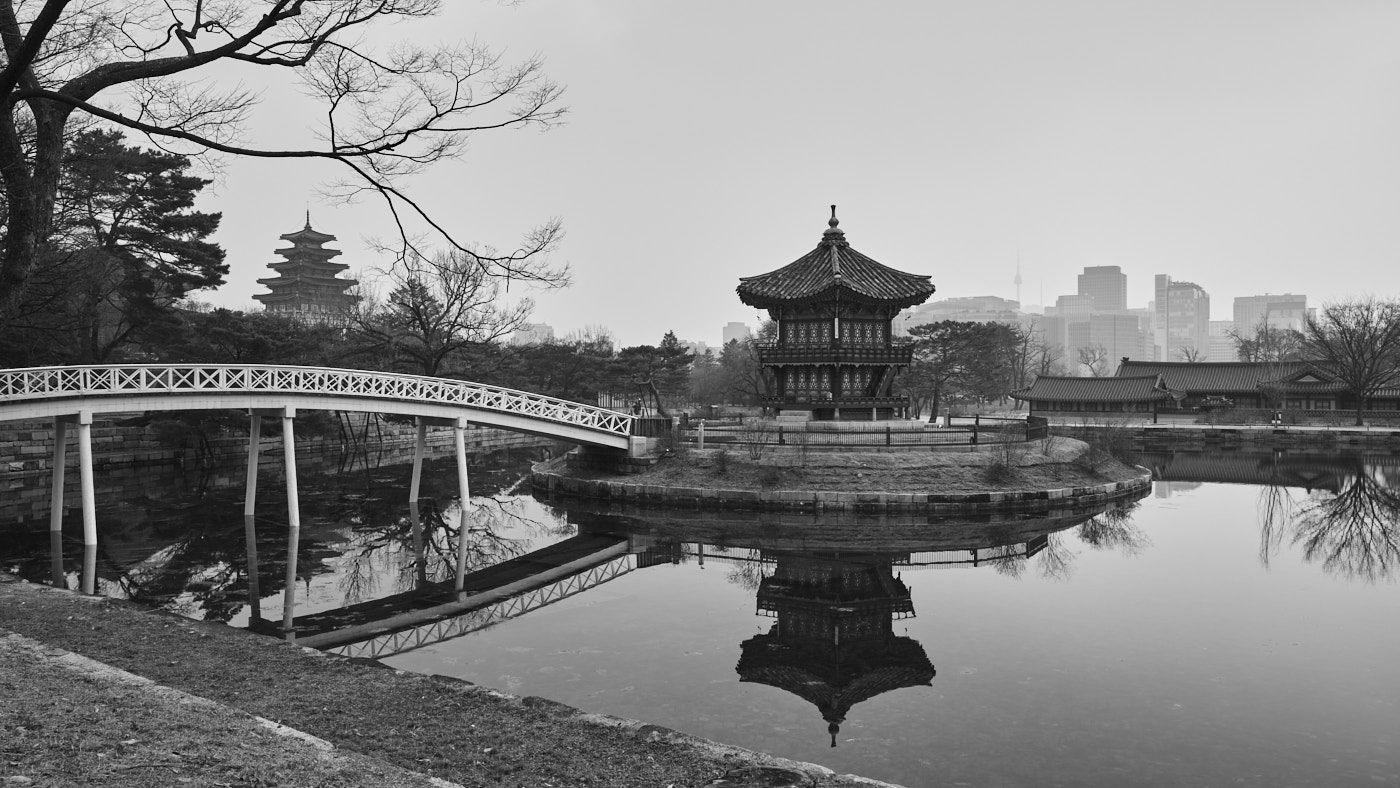 Finally, to wrap up the day, I headed up a local hill to get some cityscapes. I was met by some of the most awful pollution of the day while I was up there, and also discovered a slight difference between the GFX50S II and the GFX100S. With its PDAF array, the GFX100S is able to focus confidently through the haze and lock onto scenes like this. The GFX50S II, while it managed to focus with no problems, took several seconds to do so. This is simply down to the contrast-detect system not having any contrast to lock on to in a scene like this and is not a slight on either the body or lens. 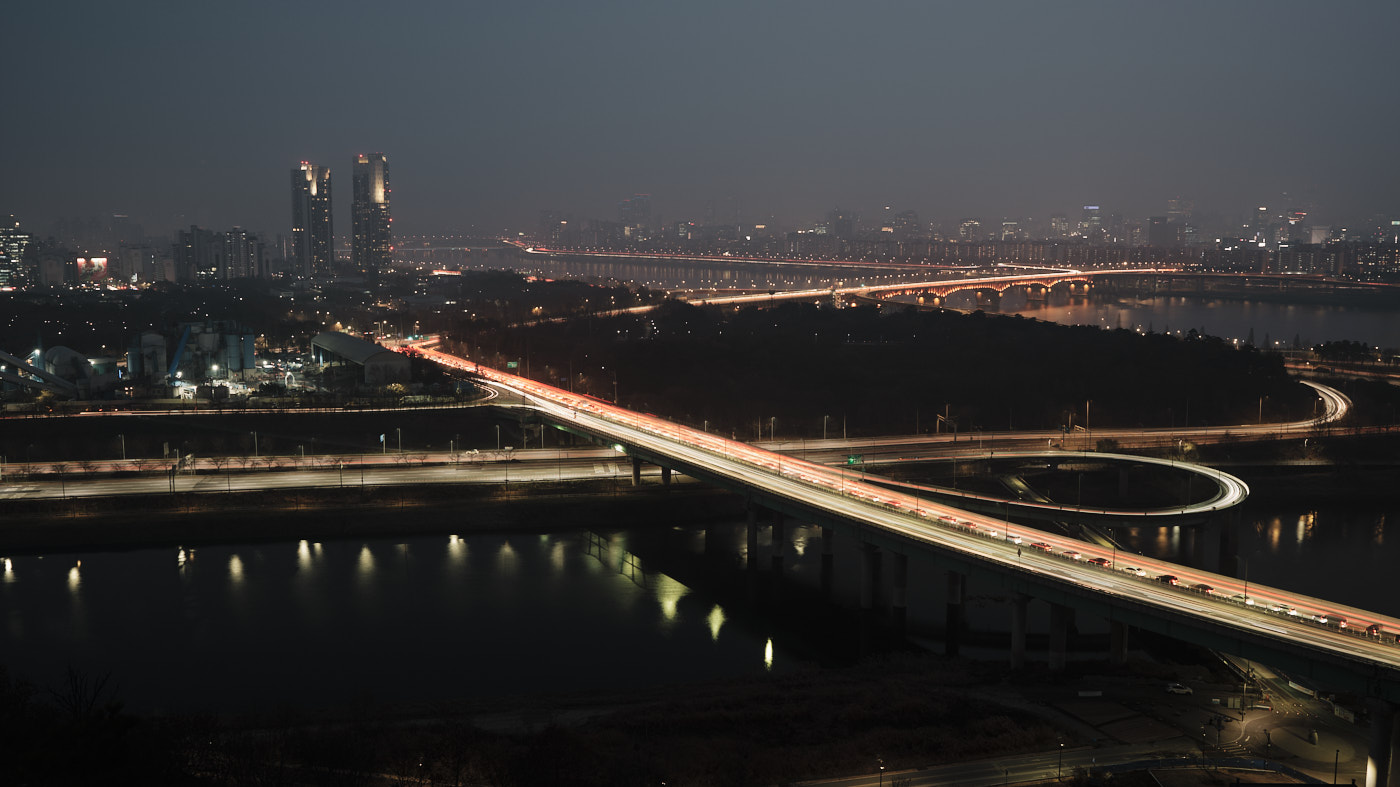 The following morning, the haze thinned for a few moments and I was able to head out to what is fast becoming one of my favourite spots to photograph light and shadow: the Dongdaemun Design Plaza. With the high contrast edges, the autofocus was swift and reliable in this scene.

My thoughts on the lens overall

The grouping of focal lengths that this lens provides are very useful for day-to-day work. You might not be able to get extremely shallow depth of field, extremely wide angle, long reach or macro images from this lens, but it does cover some commonly used focal lengths. I talk more about this in my recent YouTube video about this lens as well.

The narrow maximum aperture could be a concern for some, but if that’s the case, Fujifilm’s primes are great options for low light and shallow depth of field. For landscape or basic travel work, this might be a really good option for a lot of people.

I really enjoyed my time with this lens and it has got me craving a slightly wider option in my GFX kit. I was pleasantly surprised by its image quality, speed, size, and weight. It is a true ‘kit lens’ for the GFX system with all the detail rendering of a good quality medium format lens. If you’re just starting out in the GFX system, I’d say this is definitely a good place to do it. 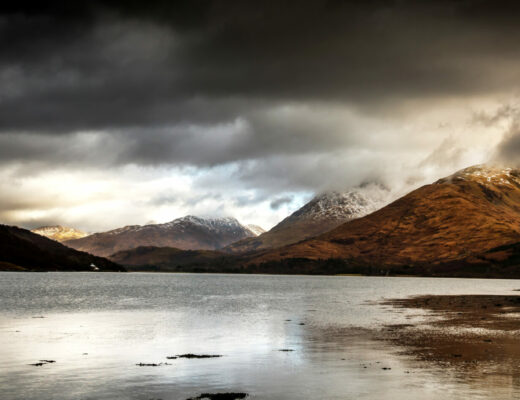 Shooting Panoramas with the GFX 50R 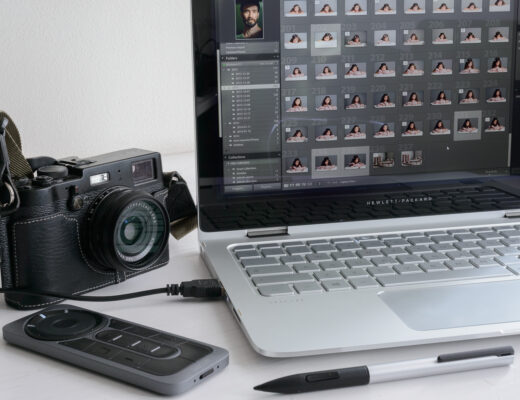 The post-production equipment for the ultra-portable photographic studio. What laptop for your Fuji? 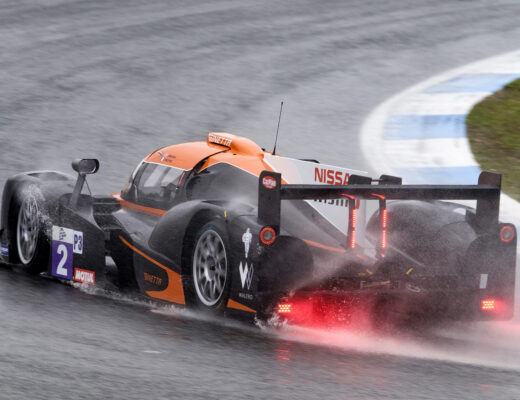 Out In All Weathers